IVF and the Vatican 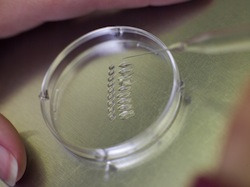 John-Henry Westen, editor-in-chief of the online news site LifeSiteNews, recently visited the Vatican to find out if the Catholic Church will ever sanction in vitro fertilization (IVF) as an accepted form of infertility treatment. He spoke with Bishop Ignacio Carrasco de Paula, a member of Opus Dei who serves as president of the Pontifical Academy for Life (PAV). As president of PAV, the Pope himself would go to Carrasco to discuss matters of bioethics.

Bishop Carrasco told Weston the question isn’t a new one, having been asked in the 1980s by a couple of the Church’s universities in Europe. Back then and today, too, the answer is no. The Church says its negative judgement of IVF is based on the many negative aspects of IVF.  If the negatives could be eliminated, the Church might change its stance.

Why a Negative Judgement?
The Vatican describes the ‘simple case’ scenario, where a single embryo is fertilized and transferred to the womb. In the ‘simple case’ scenario, a single sperm and egg must come from a married couple, even if the sperm comes from masturbatory ejaculation.  Even if this standard of IVF efficiency could be achieved, however, the Church will still not accept IVF as an approved treatment for infertility. Why? In the eyes of the Church, “the real cause of a new life -- the son” must come from a conjugal act between married parents, not from a medical procedure, a requirement that makes acceptance of IVF all but impossible.

NaPro Technology - The Church-Sanctioned Infertility Treatment
While remaining staunchly opposed to IVF as a solution to infertility, the Church does embrace NaPro Technology, a system pioneered by Dr. Thomas Hilgers. Hilgers is director and founder of the Pope Paul VI Institute, established in 1985.

NaPro (Natural Procreative) Technology closely resembles the natural rhythm method of birth control practiced for generations but, thanks to modern technology, closer monitoring of a woman’s menstrual cycle is possible. This closer monitoring involves instruction in charting and interpreting one’s own biological signs of fertility, including bleeding pattern and viscosity of cervical mucus. The technology is allowed as a means of birth control as well as identifying the precise moment a woman struggling with infertility issues is most likely to conceive.

Minor medical intervention is allowed in the NaPro Technology in cases where antibiotics can resolve infection that may reduce the chance of pregnancy; surgical intervention to correct deformities and blockages such as polyps and cysts; and hormonal or pharmaceutical courses of treatment to adjust endocrine abnormalities, repetitive miscarriage, and depression.

Source: Weston, Jon-Henry. "Interview with Vatican Official: Will Advancements in IVF Ever Lead to Acceptance by the Church?" LifeSiteNews. 11 Sept 2013. Web. 30 Sept 2013.