Smoking and High Fat Diet May Increase Infertility in Men 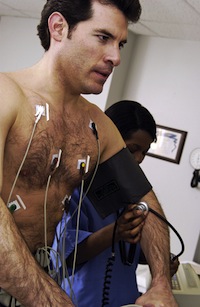 Smoking and consuming high fat diets may be responsible for infertility in men, according to a new study by researchers at the University of Newcastle School of Environmental and Life Sciences. This study shows that oxidative stress caused by these lifestyle choices could impair sperm’s ability to complete fertilization. While many studies have associated smoking and poor nutrition with infertility, this research is the first to show that these lifestyle choices could render sperm unable to infiltrate the ovum.

Male factor infertility is a growing concern in many developed nations. Doctors define male infertility as the inability to get a woman pregnant after one year of trying. Proteins are the body’s workhorses, carrying out vital functions in every cell. To accomplish their tasks, proteins must fold into complex, three-dimensional structures. A chemical known as a molecular chaperone helps proteins fold themselves into these structures. Semen contains many proteins that perform different functions, including proteins that help sperm break through the tough exterior of a human egg. Researchers in the study found that factors like smoking and consuming a high fat diet could be a reason an important molecular chaperone protein is missing in infertile men.

Associate Professor Brett Nixon, who conducted the study alongside Professor John Aitken and PhD student Elizabeth Bromfield said, "In a subset of infertile men, we found that this molecular chaperone was under-represented or completely absent, which appears to be impacting sperm fertilising potential during the reproductive process.” He went on to say that the team is currently investigating whether damage from excessive oxidative stress caused the missing protein.