Do Not Ditch All Fish While Pregnant 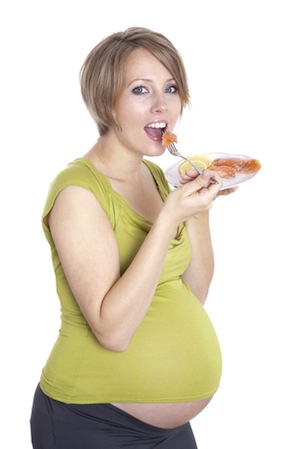 Most women know that eating certain fish while pregnant is not advised given the risk of mercury poisoning to the unborn fetus. But what many women may not know is that eating fish during pregnancy may actually confer some very big benefits for their baby- and studies have been done to prove it.

One such study conducted on 11,875 pregnant women in England showed that children of mothers who consumed less than 12 ounces of fish a week were more likely to have “suboptimum performance” on developmental and social behavior tests compared to children whose mothers ate more than 12 ounces per week. This may be because fish contains high levels of omega-3 fatty acids- long chain fatty acids considered essential for neurological development in pregnancy and early childhood. The researchers concluded that the beneficial effects of consuming at least 12 ounces a week of seafood during pregnancy far outweigh the risk when it comes to the baby’s development.

It’s understandable that moms-to-be may be wary of eating potentially harmful foods during pregnancy, but it’s important to keep in mind that not all fish are high in mercury and many are quite low and safe to consume. The FDA advises for pregnant women to not consume swordfish, tilefish, king mackerel, and shark since the level of methylmercury is higher in these large fish. It’s ok to eat 12 ounces of other cooked fish and seafood during pregnancy such as canned fish, smaller ocean fish such as salmon and flounder, shellfish, or farm-raised fish.  Be sure to choose canned light tuna instead of canned white albacore tuna as the mercury levels are higher in the latter.  A typical serving size of fish is from 3 to 6 ounces.

Below is a list of high, medium, and low mercury fish to help you choose safe seafood low in mercury and high in IQ-boosting healthy fats.  And don’t worry if you’re not a fish lover- there are other foods that contain omega-3 fatty acids which will aid in a baby’s healthy growth and development.  These foods include hemp, chia, and flax seeds, walnuts, kiwi fruit, and eggs.