Track your fertility to get pregnant faster!
Other » News and Studies » Women's Health News 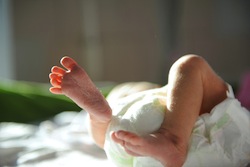 Between June and September 2009, researchers examined 3,396 newborns for orthopedic anomalies. In addition to recording the presence of an anomaly, researchers also noted mother’s age, maternal pregnancy history, pregnancy complications, labor complications and method of delivery. Information on the newborn, including gender, APGAR, length and weight, were recorded.

Conclusion: In Thailand, the most prominent orthopedic problem noted in the newborn population was calcaneovalgus, a condition often referred to as flexible flatfoot. As many as 30% of infants across the world suffer a mild form of the condition. Metatarsus, another condition affecting newborn feet, was the second most common orthopedic anomaly. Both calcaneovalgus and metatarsus can be linked to fetal positioning in the womb.