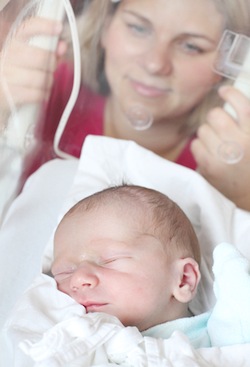 Millions of babies around the world undergo surgery during the first year of their lives. The currently preferred method to dull the pain in many cases is general anesthesia (GA) but a recent study from Australia indicates less invasive anesthesia — regional anesthesia (RA) — may produce safer outcomes.

General anesthesia puts the baby to sleep for surgery, just as it does when older children and adults get major surgical procedures done. The anesthetizing drug may be administered to the baby using a mask that allows the child to inhale the drug or by intravenous (IV) injection.

As its name implies, RA affects just a region of the baby’s body. Many women are familiar with epidurals, a form of RA pain control often used during childbirth. The pain-controlling drug is introduced into the patient’s spinal cord by injection or via a catheter.

In the hours immediately following surgery, babies may develop apnea as they recover from the surgical anesthesia. Post-surgical apnea (temporary interruption of breathing) is classified as early apnea, occurring within the first 30 minutes after surgery, and late apnea, which starts after the first half hour of recovery. Apnea is a complication of surgery that requires immediate medical intervention; the safest surgeries produce no apneic events.

One common form of surgery newborns face is herniorrhaphy (correction of a hernia). The Australian research team — led by Drs. Andrew Davidson and Geoff Frawley, both of the Royal Children’s Hospital in Melbourne — evaluated the outcomes of 722 infants who had herniorrhaphies with either GA or RA. Two factors the researchers tracked include, failure or success of anesthesia method and apnea.

For the sake of the study, anesthetic failure was defined as requiring the need for additional anesthesia to complete the herniorrhaphy after RA had been administered.

Of the entire study group, 339 infants began surgery with RA and the remaining 383 had GA. The failure-success data revealed:

Furthermore, the infants undergoing successful RA were significantly less likely to suffer early apnea than those getting GA. The rate of late apnea was about the same for both groups.

The RA proved to be as effective but safer than GA for the infants in the study although the researchers see room for improvement. Frawley said, “We found that there was a steep learning curve among anesthesia providers for infant spinal anesthesia but learning the technique could have a far-reaching impact for infants undergoing surgery.”