Is Cheerleading Safe During Pregnancy? 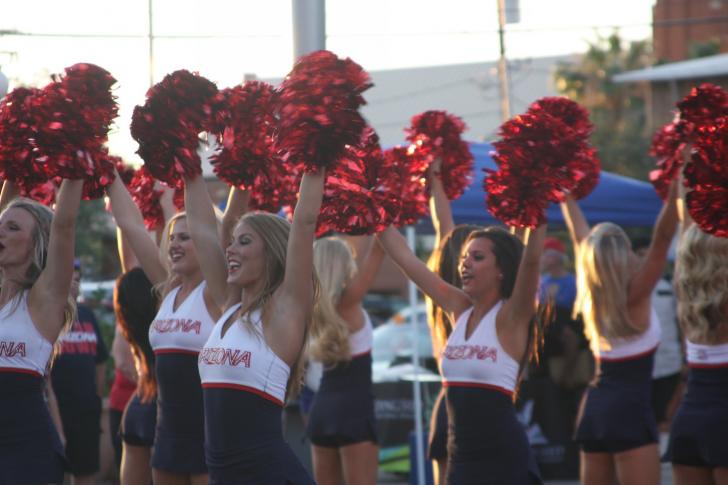 Cheerleading is not a safe activity during pregnancy because of its increased risks to the mother and baby.

Many young women on college and high school teams wonder whether they can continue cheerleading once they become pregnant. It’s a good question because cheerleading provides great team spirit and becomes part of a woman’s daily life, not just for the physicality of the sport but also for the competitive nature and the camaraderie. Aside from pregnancy, cheerleading is a dangerous sport. In fact, cheerleading has the highest rate of catastrophic injuries in sports including ankle, knee, wrist, and back injuries, however, the biggest risk of injury is to the head which results in concussions. If you want to continue cheerleading during pregnancy, you must make some modifications.

Tips For Cheerleading During Pregnancy

Refrain from stunts, tumbling, and climbing in pyramids. The potential for falling is too high. 91% of concussions among high school cheerleaders are associated with stunts such as toss or lift. During pregnancy, your joints and balance are changing. In the later months of pregnancy, your balance will be compromised by your changing center of gravity. As pregnancy progresses, your joints loosen with the release of the hormone relaxin. Relaxin causes ligament relaxation throughout the body and is released in increased amounts during pregnancy. Ligaments are connective tissues that hold bones together at the joints. When relaxin is released, the ligaments can loosen, creating extra space and flexibility between the bones of the body.This increased flexibility is necessary during pregnancy because it allows the pelvis to spread and make room for the baby as it grows and prepares for birth. However, the ligaments of the pelvis are not the only ligaments affected by relaxin. This may cause joint instability, which increases your risk of injury.

Don’t help lift any other team members into a pyramid formation. During pregnancy, you should not be lifting anything heavy. Being on the bottom of a pyramid formation is also risky because an accidental slip from a teammate could result in you and your baby getting injured.

Don’t overheat. It’s vital to not become overheated. Increasing core body temperature above 101 degrees may cause hyperthermia. When hyperthermia occurs for extended periods during the first trimester, studies have shown an increased risk of neural tube defects, including anencephaly and spina bifida. Heart defects and oral cleft defects have also been noted in studies associated with hyperthermia during pregnancy.

Stay hydrated. Your body is experiencing so many changes and utilizing so much energy during pregnancy, so you must keep supplying it with enough liquids to sustain yourself. For every 15 minutes of exercise, you should drink water. This means stopping every 15 minutes to rehydrate the body. The body can deplete the water reserves in just a small amount of time while exercising. Cutting down on caffeine and salt intake will also allow your body to use fluids more effectively.

Take frequent breaks. Fatigue is one of the most common early pregnancy signs and you may not have the stamina you did before getting pregnant. Blame rising progesterone levels in the first trimester. Fatigue may subside with your second trimester but may resurface later on. Carrying around all that extra weight can make you tire easily in the third trimester.

Know when to stop. If you have any dizziness, shortness of breath, or feel light-headed, immediately take a break to sit down or lie down on your left side, and drink water. If you become overheated, stop boxing. Increasing core body temperature above 101 degrees may cause hyperthermia. If the symptoms persist, consult your doctor.

Remember, just because you don’t participate in the more difficult physical stunts of cheerleading doesn’t mean you can’t belt out those cheers and wave those pom poms in order to support your team!