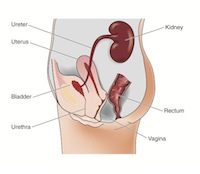 Researchers gathered more than 500,000 medical records from 18 years of births at Kaiser Permanente hospitals in Southern California to determine the rate and effects of pyelonephritis during pregnancy. Pyelonephritis is an ascending urinary tract infection that may reach the kidney. Severe cases of the infection may lead to pus surrounding the kidney, kidney failure or death. In a pregnancy setting, any infection poses a risk to fetal and maternal health.

After reviewing medical records, researchers found about 0.5%, less than 3,000 patients, suffered from acute pyelonephritis. The majority of women diagnosed with pyelonephritis were Hispanic, black, young and had less education. Other contributing factors included late prenatal care and maternal smoking.

Women with pyelonephritis were more likely to suffer other medical issues, including anemia, pulmonary insufficiency, septicemia and renal dysfunction. Spontaneous premature delivery was also an issue with most births occurring between 33 weeks and 36 weeks gestation.

Conclusion: Pyelonephritis occurs in less than 1% of pregnancies, but the infection can cause preterm delivery and may be associated with increased risk of anemia. In medical settings where prenatal screening includes asymptomatic bacteriuria, early detection is possible.