Follow us on Instagram
Our app takes the guesswork out of getting pregnant. Get Obie for iOS Now!
Getting Pregnant » Fertility

When Is Your Fertility Window?

What is my fertile window?

Calculate: Am I fertile today?

Having sex 24+ hours after the day of established ovulation is unlikely to improve your chances of getting pregnant.

On which days of my menstrual cycle am I more likely to get pregnant?

The 2 days before ovulation plus the day of ovulation have the highest chance of getting you pregnant if you have intercourse only once during the fertile window.

These 3 days are the best fertile window: 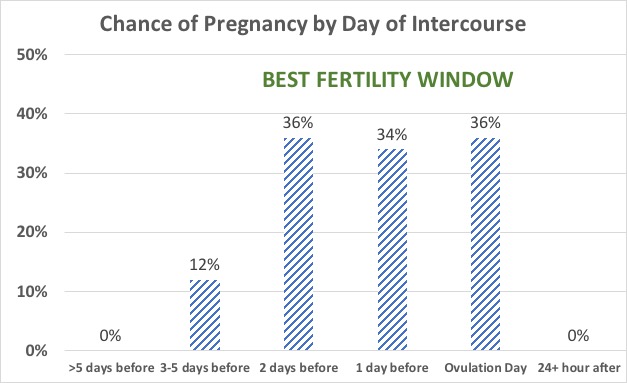 These percentages apply to intercourse for only one day:

Your probability of ovulation depends on long your cycle days are. The longer your menstrual cycle, the further down your cycle is your likely ovulation. We used to believe that in regular menstrual cycles, ovulation happens within a range of 2-3 days. However recent publications suggest that even in regular cycles ovulation can normally happen in a range of about a week or so. That is why it's essential when trying to get pregnant that you have sex over a range of days. We are helping you by having developed an ovulation and fertile days calculator which determines the range of likelihood of ovulation and fertile days. The table below follows a research study published in 2018 which calculated the chance of ovulation happening based on cycle day length. As you can see, even with a 28-day cycle, ovulation can happen in a wide range of days.

Adapted from: Can apps and calendar methods predict ovulation with accuracy? Current Medical Research and Opinion, 34:9, 1587-1594

Why can I get pregnant from intercourse up to 5 days before ovulation?

Because there is a wide range of days when ovulation can possibly occur based on menstrual cycle lengths, there is an even wider range of making sure you have sex no within 5 days prior to ovulation. Below is a table that shows you your chances to "cover" ovulation, to have sex, in anticipation of the possible ovulation day:

Instructions: In the left column move down to find your cycle days, then move to the right to find the cycle days to have sex to ensure you time sexual intercourse correctly. For example,  if your menstrual cycles are 30 days long, then having sex on each cycle day between cycle days 10-20 covers each day an over 15% chance to not miss ovulation.

Does the timing of intercourse help?

Studies have shown that even in women with regular cycles, ovulation can possibly happen any time, so "timing" of intercourse has never been shown to improve your pregnancy chances. You are probably not improving your chances of getting pregnant if you wait for intercourse until the temperature goes up or the OPK has become positive. You may already have ovulated by that time, and sex after ovulation is unlikely to get you pregnant.

Every day or every other day intercourse?

Couples who tried to get pregnant were previously told to have sex once every other day during their fertile days. Recent studies have shown that the average couple who is trying to conceive should make love regularly 2-3 times a week, every week because you don't know exactly when ovulation happens.

In addition, you may improve your chances if you have sex once a day (as long as his sperm are OK) during the fertile 4-5 days prior to, and the day of, ovulation. In those rare circumstances when the man does not have enough sperm (oligospermia), the old rule of once every other day still holds true.

From: "Timing of Sexual Intercourse in Relation to Ovulation -- Effects on the Probability of Conception, Survival of the Pregnancy, and Sex of the Baby" was published in The New England Journal of Medicine (December 7, 1995 -- Vol. 333, No. 23). Allen J. Wilcox, Clarice R. Weinberg, Donna D. Bair.