Track your fertility to get pregnant faster!
Baby & Child » Breastfeeding

Is Caffeine Safe for Consumption While Breastfeeding? 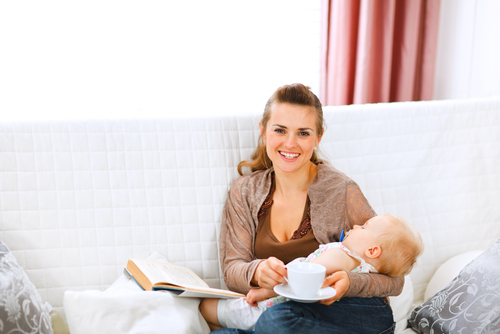 Caffeine is one of the most popular stimulants in the world. Though studies and opinions fall on both sides of the debate, pregnant and breastfeeding women are typically told that caffeine consumption is okay as long as caffeine is consumed in moderation. During a recent interview with Dr. Ruth Lawrence published in the Journal of Caffeine Research, caffeine is safe for breastfeeding women, but during the first few weeks of life, caffeine consumption should be limited to no more than 300mg of caffeine or about 2 small cups of coffee from all sources.

According to Dr. Lawrence, newborns don’t have the ability to process or metabolize caffeine like adults. Doctors realized this after using caffeine as a means of treating heart apnea in the neonatal intensive care unit. At first, caffeine was administered multiple times a day to increase heart rate, but doctors soon recognized that the infants were holding on to the caffeine as metabolization was slow. Dosage protocol was changed to once per day as a result.

In terms of breastfeeding, Lawrence believes the biggest challenge is controlling caffeine intake at or below 300mg because many women have no idea that caffeine comes from multiple sources. Caffeine is found in coffee, teas, sodas, chocolate and some foods. If a breastfeeding mom has three cups of coffee in the morning, she has likely already consumed the maximum 300mg of caffeine. A small amount of that caffeine is passed to baby in breastmilk. If she chooses to consume more caffeine throughout the day, the infant continues to store the caffeine for metabolization and negative side effects can occur.

It is important to note that some infants may be born with an increased ability to metabolize caffeine if the pregnant woman consumed caffeine during the pregnancy. There are variations on how much caffeine a newborn can metabolize. In some hospitals, caffeine levels in a newborn can be tested with a heel stick, similar to the stick administered for the sickle cell anemia and other blood tests.