Saturated fat has now been found to decrease fertility in men. 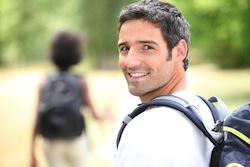 Saturated fats are “saturated” with hydrogen, meaning that all of their carbons have hydrogen stuck to them, leaving no room for other atoms. This structure makes them solid (usually) at room temperature. Because these fats are solid at room temperature, you can think of them as being the same way in the body- not moving fluidly through the system like their more-liquid unsaturated counterparts. Their artery-clogging capability is why saturated fats have been associated with elevated cholesterol levels and an increased risk for heart disease. The new research showing that this type of fat may decrease fertility in men just adds to the list of reasons to limit it in the diet.

Saturated fats are found primarily in animal products such as high fat cheeses, meats, milk, cream, butter, and ice cream. They are also found in some plants sources including palm and palm kernel oil, coconut and coconut oil, and cocoa butter. Reducing daily intake may seem simple with a switch to lean meats and low fat or fat free dairy products, but unfortunately saturated fat can be found hiding in many commercially prepared food items such as crackers, peanut butter, breakfast cereals and bars, powdered coffee creamer and popcorn.

Since palm oil stands up to well to heat, it is used as a fat source when baking crackers and frying chips, and is also used in many “no-stir” peanut butters to keep the peanut oil from separating from the peanut butter. With palm and coconut oil added to so many commonly-consumed packaged food items, it’s easy to go over the daily limit of consuming 10% of calories (about 20 grams for most people) from saturated fat. Besides consuming fat-free (skim) and low fat (1%) milk and dairy products, and consuming the leanest cuts of meat, it’s important to read food labels. Foods with less than 1 gram are considered low in saturated fat. Even if a food had more than 1 gram of saturated fat, compare food labels to see which item provides less. Most importantly, try to base your diet on unprocessed, natural foods by eating plenty of fruits, vegetables, and by choosing vegetarian protein sources. These are naturally fat-free, or contain heart healthy unsaturated fats such as in the case of tofu, nuts and seeds.

Popcorm, without butter or flavorings, is naturally low in saturated fat. 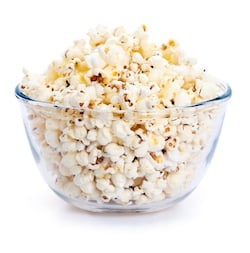 Some other tips to reduce saturated fat include:

Remember, we do need some saturated fat in our diet as this type of fat helps structure our cell membranes and make cholesterol, which is a precursor to hormones such as vitamin D (used to incorporate calcium into the bones), estrogen, progesterone, and bile acids (which are necessary for the digestion of fats). In order to absorb calcium, have normal sex hormones and absorb fat, we need a little of the saturated stuff, thus confirming that balance is key when it comes to health and fertility.