Newborns Aware of Their Own Existence on Day Two 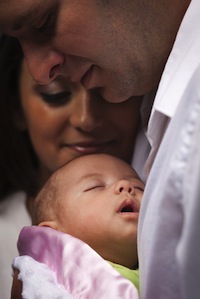 There’s nothing more fascinating for new parents than to watch the world unfold for their new baby. The infant’s voyage of discovery begins at the moment of birth, if not before, but it's too soon for your bundle of joy to describe the wonders it encounters with every breath. One question many parents ponder is when does this glorious little person know it is indeed a separate and unique human being. When does the sense of self come into a baby’s existence?

To test a newborn’s sense of self-awareness, Filippetti and her team of colleagues tweaked a test known as the rubber hand illusion to gauge a baby’s reaction to certain stimuli. The experiment included a paint brush to stroke the cheeks of the babies in the study and a video of another baby.

Interestingly, when the same experiment was conducted with the videotaped baby upside down, the live infant did not respond, even when cheeks were stroked simultaneously.

Filippetti acknowledges that her findings are not an absolute certainty since the babies in the study could not speak for themselves to confirm her hypothesis, but she says the factors related to body awareness in adults are the same as those exhibited by the newborns in her study.

Filippetti hopes this and other similar experiments will lead to new insights governing atypical development issues, including the autism spectrum disorder (ASD).