Is It Safe To Play Lacrosse During Pregnancy? 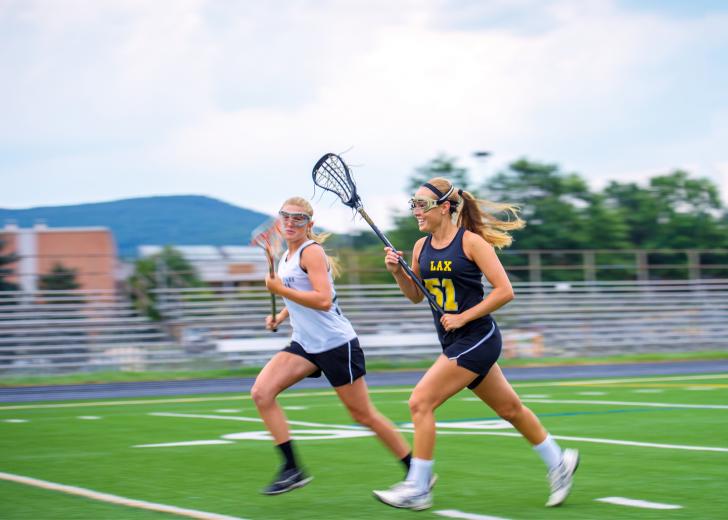 Lacrosse is a great, interactive team sport that gives you an intense cardio workout to boot. Some compare it to field hockey, although in lacrosse, you use a stick that has a head for catching and a ball instead of a puck. The rules are different but the basic concept when it comes down to the running workout it provides is virtually the same. However, lacrosse is a high impact contact sport.

This is one of the reasons that the American College of Obstetricians and Gynecologists recommends:" Those activities with a high risk of falling or for abdominal trauma should be avoided during pregnancy."

Risks Of Playing Lacrosse During Pregnancy

You may accidentally collide with another player: Not only can you crash into other opponents but you also run the risk of being jabbed in the stomach with a lacrosse stick. The head of a lacrosse stick is typically made with titanium and scandium, and it can produce quite an impact of you get hit with one during a game.

A lacrosse ball being pummeled across the field could produce a force which when struck in the abdomen could injure your growing baby.

You have a higher risk of falling: Balance is compromised during pregnancy. As your belly grows, your gravity will shift and you’ll also have more stress placed on your joints and muscles. All of these changes will make you more likely to lose your balance and fall down. If you fall later in your pregnancy, it could cause your growing baby irreversible harm.

Your joints are changing: A few key things to keep an eye on are your balance and your joints. In the later months of pregnancy, your balance will be compromised by your changing center of gravity and kickboxing can challenge your balance even more. As pregnancy progresses, your joints loosen with the release of the hormone relaxin. Relaxin causes ligament relaxation throughout the body and is released in increased amounts during pregnancy. Ligaments are connective tissues that hold bones together at the joints. When relaxin is released, the ligaments can loosen, creating extra space and flexibility between the bones of the body. This increased flexibility is necessary during pregnancy because it allows the pelvis to spread and make room for the baby as it grows and prepares for birth. However, the ligaments of the pelvis are not the only ligaments affected by relaxin. This may cause joint instability, which increases your risk of injury.