Do Snoring Moms Have Smaller Babies? 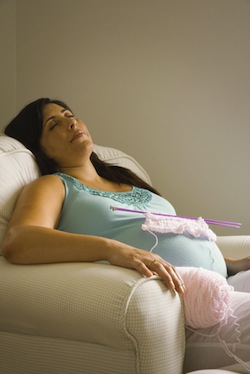 A recently published study from the University of Michigan (UM) Health System says yes, they do. Snoring is a symptom of obstructive sleep apnea, a breathing problem that occurs during sleep and causes lowered levels of oxygen in the blood. This lowering of blood oxygen levels can affect the health of a developing baby. The study’s findings suggest a common, noninvasive sleep therapy, perfectly safe to use during pregnancy, may improve the odds of a healthier baby.

The UM study is the largest study yet to explore the connection between a mother’s snoring during pregnancy and the delivery outcome and health of the baby she carries. Between 2007 and 2010, 1,673 women participated in the study. All were recruited from prenatal clinics.

For the sake of the study, a chronic snorer is a person who snored before and during pregnancy. Habitual snorers are those that snore three or more nights a week. In the UM study, about 35 percent reported habitual snoring. About half of all expectant women develop a snoring habit by the third trimester.

Snoring and obstructive sleep apnea can be treated rather easily with use of a continuous positive airway pressure (CPAP) device during sleep. Louise O’Brien, PhD, MS, says screening pregnant women for sleep disorders such as snoring and apnea and prescribing CPAP therapy during pregnancy might be one way to reduce the number of associated adverse outcomes.

"Millions of healthcare dollars are spent on operative deliveries, taking care of babies who are admitted to the NICU and treating secondary health problems that smaller babies are at risk for when grown. If we can identify risk factors during pregnancy that can be treated, such as obstructive sleep apnea, we can reduce the incidence of small babies, C-sections, and possibly NICU," according to O’Brien, who is an associate professor at the UM Sleep DIsorders Center and an associate research scientist in the university’s oral and maxillofacial surgery department.

The medical journal, SLEEP, carries full details of the O’Brien study in its online edition.