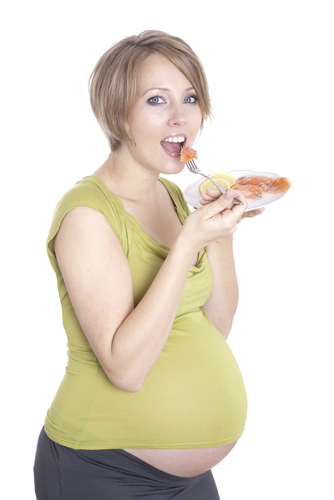 Salmon is in the limelight because of the selenium and retinol content. Unlike other omega-3 rich fish, the fatty acids in salmon are more easily absorbed and, according to researchers, pregnant women pass the antioxidant benefits of omega-3s on to the fetus in utero.

Women participating in the study were broken up into two groups. The first group naturally ate very little fish. They were told to continue eating a normal diet. The second group naturally ate very little fish, but this group was given two servings of salmon per week. At the conclusion of the study, women in the salmon group tested higher for concentrations omega-3 fatty acids.

Blood and urine samples were used to test omega-3 fatty acid concentrations. Tests were administered during the 20th, 34th and 38th week of gestation. At birth, a cord blood sample was taken for testing.

Despite the positive benefits associated with increasing omega-3 intake, the study does have one major flaw. The salmon fed to the pregnant women in the study was fed a controlled diet that naturally increased the omega-3 fatty acid concentration of the fish meat. The diet also helped control contaminate levels so the fish was safe for consumption during pregnancy. Salmon found in grocery stores is not likely raised with the same care as salmon used in this study. The contamination level and omega-3 concentration will vary from one piece of salmon to the next and one retailer to the next.

Before increasing salmon or fish intake, talk with your obstetrician about the safest fish during pregnancy. Salmon is rich in antioxidants, but there are other, safe foods that also contain a strong omega 3 profile with no risk of contamination. Discuss the best sources of omega 3 with your doctor before adding any potential hazardous foods to your diet.