Not All Unsaturated Fats are Created Equal 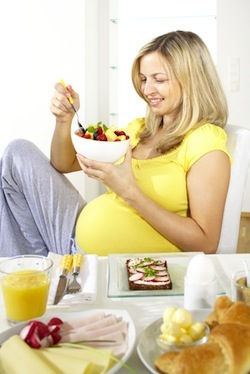 Omega 6 PUFAs are found mainly in vegetable oils, nuts, and seeds. Because they are found in refined vegetable oils such as soy and corn oil (those that are used to make many snack foods such as cookies, crackers, sweets and fast foods), it’s easy to go overboard. Walnuts, flax seeds and fatty fish, on the other hand, are rich sources of omega 3 PUFAs.

The ratio of omega 6 to omega 3 in the diet should be about 1:1, but today most people consume much more omega 6 fats than omega 3’s in a ratio of about 15:1. This unbalanced ratio has been shown to lead to the development of many chronic diseases including heart disease and cancer and new research shows, maybe even fatter babies.

A study published in the Journal of Clinical Endocrinology and Metabolism measured the blood levels of polyunsaturated fatty acids in the plasma of 293 mothers during pregnancy. They then measured the fat and muscle mass of these children at age 4 and 6 years old. The children of mothers with a higher plasma level of omega 6 PUFA had a greater fat mass than those of mothers with lower levels of this type of fat. There was a connection between higher levels of omega 3 fatty acids in a mother’s plasma, corresponding with lower fat mass and higher muscle mass in offspring, but this association was weaker than the association between omega 6 PUFAs and increased fat mass.

Omega 6 fats are not unhealthy in moderation- in fact they are essential to health and should make up between 5 and 10% of total calories. If consumed in the place of saturated fats, they can even improve brain and heart function. By limiting the amount of packaged and fast foods that are made with refined vegetable oils, omega 6 intake can be reduced.

The American Heart Association recommends eating fish (particularly fatty fish) at least two times (two servings) a week to increase intake of omega 3 PUFAs. Each serving is 3.5 ounce cooked, or about ¾ cup of flaked fish. Fatty fish like salmon, mackerel, herring, lake trout, and sardines are high in omega-3 fatty acids and also low in mercury, a toxin which should be avoided by pregnant women. Because walnuts and flax seeds are a good source of omega 3 PUFAs, they can be included in the diet to further boost omega 3 consumption.

For optimal health, fat should make up about 20-35% of overall calories. By getting most of this fat from unsaturated sources and by consuming mostly fresh, whole foods instead of “fast” and overly processed ones, you’ll be doing your and your baby’s health a big favor. Once again, science and a little bit of common sense proves that balance and moderation will benefit the health of both mother and baby.