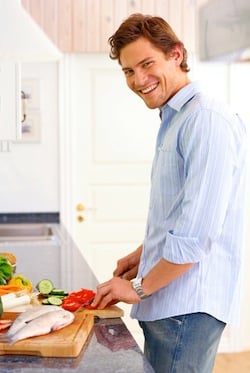 Gentlemen, please eat your greens. And cereal, fruits, and veggies. Your children’s lives may depend on it.

The folate in these foods is vital to the development of a baby in the womb. Expectant mothers know to take vitamin B9 (folic acid) supplements before and during pregnancy but new research suggests dad’s diet needs to be folate-rich even before the baby is conceived.

A deficiency in folic acid has long been associated with birth defects that include deformities of the head and face and of the spine, including spina bifida. Folate is naturally abundant in leafy greens, fruits, and vegetables and many cereals are supplemented with it. Meat is another natural source of folate.

The research team, led by Sarah Kimmins, identified regions of the sperm’s epigenome sensitive to diet and other life experiences in a way that suggest sperm carries with it a memory of the father’s diet, lifestyle choices, and environment. The epigenome works like a switch, turning on and off genes that influence a child’s life-long health, inheritable diseases such as diabetes, and cancer.

According to Kimmins, "Our research suggests that fathers need to think about what they put in their mouths, what they smoke and what they drink and remember they are caretakers of generations to come.” Kimmins hopes to advance the study using men at fertility clinics to assess how paternal diet and weight affects the health of their children.

Fast food diets - high in fats and low in nutrients - can cause a B9 deficiency and obesity, often a result of a fast-food diet, and can hinder metabolism of B9. People in areas plagued by food insecurity - limited access to fresh, affordable healthy foods - are more likely to be deficient in folate than those with readily available nutritious fresh foods.