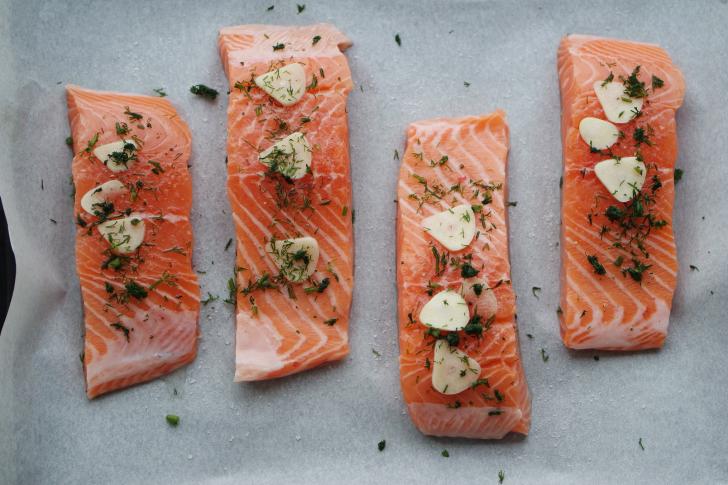 Dietary restrictions and suggestions during pregnancy can be difficult to keep track of – soft cheeses are off the menu, but hard cheeses are fine as long as they are pasteurized. Lunch meat should be avoided if possible, but lean protein is crucial to a healthy pregnancy. One of the most difficult food choices for pregnant women involves fish. Low-mercury fish are a good source of omega fatty acids like DHA, but high-mercury fish should be avoided during pregnancy. According to researchers from Bristol University in the United Kingdom, low-mercury seafood offers more than omega fatty acids.

A study of more than 9,500 expectant women published in the journal PLoS One asked women to fill out a dietary questionnaire. The study was completed in the 32nd week of pregnancy. The level of anxiety was recorded by the research team. Based on a comparison between dietary intake and anxiety level, women who ate no seafood during pregnancy were more likely to suffer anxiety (53%). Vegetarians were also at increased risk of anxiety (25%) compared to women who chose to eat fish and meat.

Despite the possible connection between anxiety and omega fatty acids, doctors and researchers have no idea why or how fatty acids affect anxiety levels. Researchers are particularly interested in PUFA – polyunsaturated fatty acids commonly found in seafood.

Anxiety during pregnancy is about more than an emotional state. Previous studies have suggested a connection between higher levels of anxiety and premature delivery, low birth weight, and developmental issues in infants.

According to the Food and Drug Administration, all seafood contains mercury, but some fish is safer than others during pregnancy. Shark, tilefish, king mackerel, and swordfish have the highest mercury content and should be avoided during pregnancy. Canned tuna, shrimp, catfish and salmon are excellent choices as all have lower mercury levels.

Pregnant women can consume up to 12 ounces of fish per week. Due to the increased level of anxiety in vegetarians during pregnancy, women may want to consider adding fish to their diet if only for the duration of pregnancy.